You are here: Home » Contact Us » Meet Our Staff » Meet Cantor Green 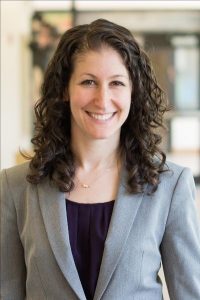 After 10 years, Cantor Green is thrilled to be coming home to Portland, Oregon, and rejoining the Congregation Beth Israel family where she was mentored by Cantor Judy Schiff and Cantor Ida Rae Cahana. Cantor Green will be joining the clergy team as part-time cantor.

Most recently, Cantor Green served for five years as cantor at Congregation B’nai Jehoshua Beth Elohim (BJBE) in Deerfield, Illinois. During this time, she also served as president of the Reform Cantors of Chicago for two years.

Cantor Green’s passions include empowering youth through music, creating meaningful prayer experiences, and building inclusive communities. While at BJBE, she expanded the youth choir program and created a teen band, while also focusing on other opportunities for young people to engage in Jewish prayer life. She also led inclusion efforts at the synagogue, helping BJBE to become a certified exemplar synagogue for inclusion through the Union for Reform Judaism. Part of her efforts included creating an accessibility center that provided resources for people of all abilities to fully engage in worship.

Cantor Green was ordained in 2015 at Hebrew Union College – Jewish Institute of Religion. As a student cantor, she gained experiences in a variety of settings, such as Tzur Hadassah in Israel, Central Synagogue in Manhattan, Brooklyn Heights Synagogue, and Port Jewish Center in Port Washington, New York. She also served as a chaplain intern at The New Jewish Home of Manhattan.

During cantorial school, Cantor Green became a Tisch Fellow, a prestigious honor and cohort led by scholar Rabbi Larry Hoffman, Ph.D. She was also a member of the Worship Working Group, a group dedicated to making prayer services spiritual and meaningful through music and innovation. Cantor Green wrote her thesis on the significance of the body and movement in Jewish prayer.

A native of Anchorage, Alaska, Cantor Green spent winters serving on her synagogue youth group board and spent her summers in California at URJ Camp Swig. She received a Bachelor of Arts in Family and Human Services from the University of Oregon in 2003. While in college, she led worship at the University of Oregon Hillel. After college, she was a song leader at URJ Camp Newman in California and had the honor of being the inaugural head song leader at URJ Camp Kalsman in Washington.

Cantor Green is an active member of the American Conference of Cantors.

Cantor Green lives in Portland with her husband, Eli, her two sons, Emmet and Aviv, and her dog, Tsuki