You are here: Home » Contact Us » Meet Our Staff » Meet Rabbi Cahana 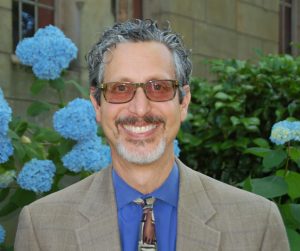 More about Rabbi Cahana
Rabbi Michael Z. Cahana joined our community in July 2006, becoming the 18th Senior Rabbi to serve Congregation Beth Israel in Portland, Oregon. Leading synagogues in the Midwest and the East Coast, Rabbi Cahana has strived to create vibrant and inclusive Jewish communities. Through his leadership and programming, Rabbi Cahana has reached out to unaffiliated Jews, interfaith families, and others who have struggled to find a home in the Jewish community. Rabbi Cahana brings to Congregation Beth Israel his passion for creating a warm, supportive community in which Jewish learning and worship are exciting and engaging.

Rabbi Cahana’s academic interests are the interface of religion and science with a particular emphasis on medical ethics. He has served on the Central Conference of American Rabbi’s Committee on Human Sexuality and chaired its ad hoc committee on Physician-Assisted Suicide and its the Resolutions Committee. Rabbi Cahana continues to serve on community boards and inter-religious councils; and is a past President of the Oregon Board of Rabbis. Rabbi Cahana has published on such diverse topics as physician-assisted suicide in Jewish law, the Unvoiced Tetragrammaton, and the role of religion in the T.V. series “Battlestar Galactica”.

In 1999, Rabbi Cahana was featured, along with his family, in the critically acclaimed documentary “The Last Days.” The film tells the true stories of five Hungarian survivors of the Holocaust, including Rabbi Cahana’s mother – the renowned Holocaust artist Alice Lok Cahana (z”l). “The Last Days,” which was produced by Steven Speilberg’s Survivors of the Shoah Visual History Foundation, won the 1999 Academy Award for “Best Documentary.” In 2009, he accompanied his mother to Rome where one of her large-scale paintings became the first piece of Holocaust art on permanent display in the Vatican museum.

Born in Houston, Texas, Rabbi Cahana comes from multiple generations of rabbis including his late father, Rabbi Moshe Cahana, and his older brother, Rabbi Ronnie Cahana. Rabbi Cahana began with a career in theater, including acting, directing, and theatrical design. He later earned an MFA in Architectural Lighting from Parson’s School of Design. Soon, however, family tradition of the rabbinic life called him, leading to his ordination in 1994, becoming the first Reform rabbi in his family’s long rabbinic history. Rabbi Cahana integrates his rabbinical training with his theater background to create an environment in which prayer becomes an art form. During worship, there is an aesthetic of thought, when individual moments can inspire movement and change.

Rabbi Cahana is also highly engaged in social action, embracing the concept of Tikkun Olam (repairing the world) to make our community and nation better. He serves on the leadership team of Lift Every Voice Oregon, and interfaith movement to pass gun safety legislation in Oregon. He also is on the Board of Cedar Sinai Park and an at-large member of the Jewish Community Relations Council of the Jewish Federation of Greater Portland.

While studying in Jerusalem, he met his wife, Cantor Ida Rae Cahana who is formerly the Senior Cantor of Manhattan’s Central Synagogue and now serves as Senior Cantor at CBI. They live in Portland with their son, David, and triplets Sarit, Liora, and Idit.