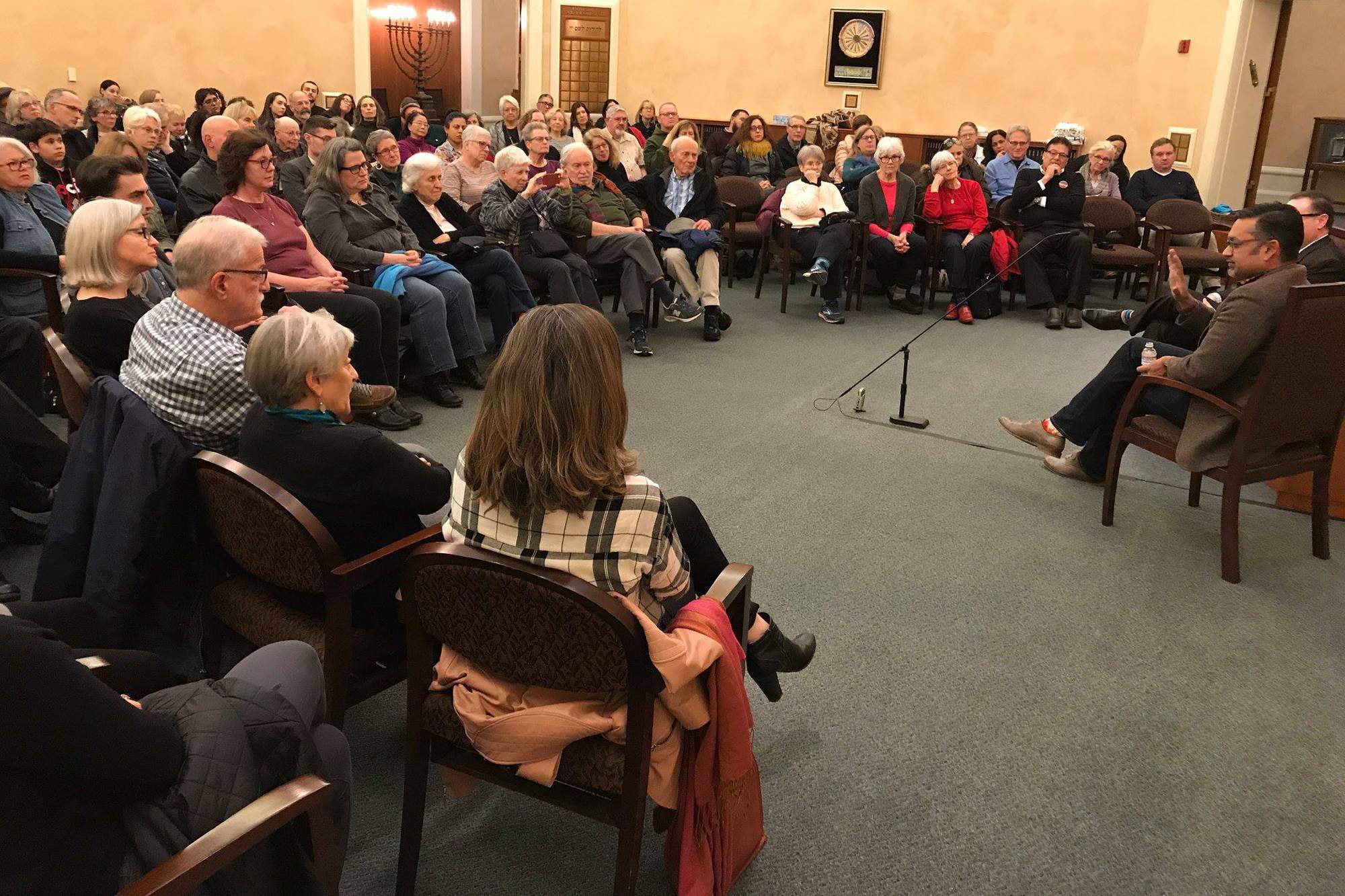 Unless otherwise indicated, all programs will be hybrid; join us in-person or online.

Pack your bags and join Rabbi and Cantor Cahana as we connect with Jewish communities in Havana, Santa Clara, and Cienfuegos. Ayelet Tours leads this unforgettable trip, which will include vintage cars, music, rum, cigars, art, and more.

Click here or scan the QR code on the left to register. 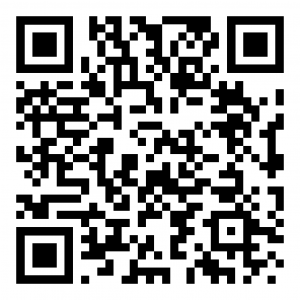 How Does American Society Perceive the Breadth of Free Speech Rights? What happens when those rights collide with actionable threats and hate speech?

How has the use and abuse of social media changed norms around free speech?

Presented by a panel of young congregants

How do we teach about uncomfortable topics? What is the impact in our schools? How are curriculum decisions made? How do we approach false speech?

Join us as we view and discuss “Gentlemen’s Agreement” (Gregory Peck, Dorothy McGuire, John Garfield, Celeste Holm) – what has/has not changed? Robust snacks (more than popcorn) will be provided.

Miss out on any of our Adult Education programs? They are now archived online! You may also watch our events live online by clicking the same link.

Mormonism and the Prophets
Wednesday, October 28, 7:00 PM
via Zoom

Our Adult Education Series on the Prophets continues with Steve Rallison and Allen Oyler from the Beaverton Stake of the Church of Jesus Christ and the Latter Day Saints (popularly known as the Mormon Church).  Steve Rallison, on the Board of Trustees for Cedar Sinai Park, and Allen Oyler, winner of the Beaverton Human Rights Award will give an introduction to the Church and reflect on its view of God, Revelation, and the role of the Prophets in our lives.

Investigative Reporter and activist Jerry Mitchell will present from his latest, Race Against Time and CBI’s own Ron Silver will moderate a Q&A. CBI students on last year’s Civil Rights Trip already met with Mitchell; now it is your turn. LaRhonda Steele and the NW Freedom Singers will open the event with a rendition of “Oh Freedom.”

Coverage of Mitchell’s latest appears in the New York Times, and copies of the work will be available for purchase at the event.

Learn to perfect this tasty treat and engage in an age old debate: which filling is the best. Join Gillian Rosicky and learn the secrets to perfect Hamentashcen. No more drooping dough or spilling filling. Just bring a rolling pin and a cookie sheet and you’ll take home the best Hamantaschen you and your family have ever eaten.

The Prophets: an Adult Education Lunch And Learn, Sessions 1 and 2
Thursday, November 14, Thursday and November 21, 12:00 PM
Shirley and Herbert Semler Board

The TaNaKh is comprised of the Torah (5 Books of Moses), the Prophets, and the Writings. However, the Prophets cover more than one-third of the Bible — twenty-one of the thirty-nine books of the canon. Did you know that each Shabbat we read a prophetic text to accompany the Torah reading?  Who were they? How did they become a prophet? Join Rabbi Joseph in exploring the making of an ancient prophet and how today we still draw deep meaning from their words.

When Dr. King called for “justice to roll down like a river and righteousness like a mighty stream” he was quoting the Hebrew Prophet Amos.  Brilliant civil rights strategist, and Baptist minister, James Bevel wore a yarmulke to honor the Hebrew Prophets he revered.  And Rabbi Abraham Joshua Heschel was the scholar of the Hebrew Prophets that inspired them.  At our  final Lunch and Learn about the Prophets, join join Ron Silver as he explores the relationship between Civil Rights leaders, the Hebrew Prophets and Rabbi Heschel.

Food plays a starring role in Jewish tradition from Friday night dinner to the Passover Seder, but its significance goes beyond the fact that Jews like to eat! Through our “Food for the Soul” program, you can explore some insights of our tradition on the “Torah of the kitchen” from the Talmud to the Hasidic masters. To add to the experience, you will sample wine, enjoy cheese tasting and indulge yourselves with rich chocolate. Your day at Sokol Blosser includes a discussion of The Shulchan Arukh, our sacred table, and how food plays a ritual role in Judaism with Wendy Bocarsky, a conversation on The Kabbalah of Food, how we taste and what we taste with Rabbi Shelton Donnell… and of course food. Coffee, snacks, a farm-to-table lunch served family style, wine selections from Sokol Blosser Vineyard, cheese chosen by cheese monger Chris Remy of Elephants Delicatessen, and chocolate created by chocolatier Christina Yen, Yen for Chocolate.

Michael Allen Harrison presents “Rhapsody in Bernstein,” a program of commentary and music as part of CBI’s celebration of Leonard Bernstein’s 100th birthday.  Harrison, a distinguished musician and composer who has recorded more than fifty albums, well known at CBI where he often accompanies the choir and has inspired us with his piano during Yom Kippur services.  With this program, Michael explores Bernstein’s gift for interpreting the great works of George Gershwin as well as West Side Story and Symphony No. 3 (Kaddish), two of his favorite Bernstein masterpieces.

From Camp Herzl to The Basement Tapes: a Look at Yearning in The Early Work of Bob Dylan
Wednesday, April 17, 7:00 PM
Pollin Chapel

Join former CBI Associate Rabbi Allan Berg, a noted expert on Bob Dylan’s life and his music., for an exploration of five Dylan gems, each demonstrating Dylan’s unique marriage of words with music. This selection represents the arc of his
life from the Midwest – North Country’s unique Zionist oriented Camp Herzl to the transcendental hills of Up-State New York, from folk-to beat infused rock and roll, to country, to an entirely original hybrid known as The Basement Tapes.

At the end of WWII, hard hitting plays like “Home of the Brave” and Academy Award winning movies like “Crossfire” and “Gentlemen’s Agreement” shined a spotlight on Anti-Semitism in America.  But that focus softened and by the early 1950’s, the Goldbergs were America’s favorite neighbors featured in that new medium called television. Come be entertained by  Ron Silver and Joanne Treuhaft as they use several film clips to explore this shift.

Three Clergy Present: “The Illusion of Inclusion: Welcomed, Welcoming and Sometimes, Not.”

On February 9, 2016, three clergy from three of the major NW Portland religious institutions gathered to discuss and teach about issues from their unique religious perspectives. Inclusion and Welcoming are important words in our religious practice these days. But how do we define ourselves if there is no distinction? America is a land of religious inclusion – but it hasn’t always been. Exclusion is also a part of our history. Read more about the event in this Catholic Sentinel article.

Watch video of some of the event:

Three Clergy Present 2015 – Three Clergy and a Wedding: Marriage, Divorce, and Remarriage in our Religious Tradition

Continuing their popular series of discussions, the leaders of three major congregations in our corner of NW Portland joined in a lively dialogue.

Read more and watch snippets from the event.

Jews and the Civil Rights Movement: The Mississippi Journey of Mickey and Rita Schwerner

Former Oregon Supreme Court Justice Jacob Tanzer, Ron Silver, and the Northwest Freedom Singers told the story of Mickey and Rita Schwerner and Jewish participation in the Civil Rights Movement in Mississippi in the 1960s. After the FBI found the bodies of Mickey Schwerner, James Chaney, and Andrew Goodman in August 1964, Jake Tanzer was part of the Justice Department team that went to Mississippi to root out and indict the killers. Ron and Jake shared how Jews came to play such a large role in the Movement and how most of the killers were finally brought to justice. The Northwest Freedom Singers made the room come alive with the music of the Movement.

The Struggle with G-d: From Antiquity to Modernity

This was a series of three lectures by Rabbi Michael Cahana about our struggle with G-d. Previous attendance is not a prerequisite to latter sessions.

Judaism’s radical insight to religion is the concept of a single G-d, unseeable and to a certain extent unknowable. And yet, that uniqueness creates a problem known to Moses and all the prophets: How can I know an unknowable G-d? In this series of classes, we will discuss the struggle we Jews have with divinity. Having trouble with G-d? Join the club!

In this final session we discussed one of the most theological difficult subjects: The question of where is G-d in our most difficult times. We looked at historic challenges from the Expulsions (Israel, Spain), the challenges brought by the Enlightenment, the Shoah and the 20th Century “Death of God” movement.